Circus has been mesmerizing people for centuries with its raw beauty, and promise of the new and strange. When walking into a circus tent, you know that no matter what happens next, it’ll be an adventure. A circus performer can take something as simple as two straps or a piece of rope, and somehow manage to tell a beautiful tale from which no one can look away. A little piece of who the performer is always shines through.

Plenty of people have experienced large-scale circus, and it’s often what comes to mind when thinking of circus. You think of shows like Cirque du Soleil and Ringling Bros., where the performers are 50 feet away and most of the viewing tends to be from afar. Far less common is the opportunity to experience circus on a smaller, more intimate scale, as is the case in Europe, or in Seattle’s Teatro ZinZanni; a circus cabaret. Even fewer have been lucky enough to see what happens backstage. 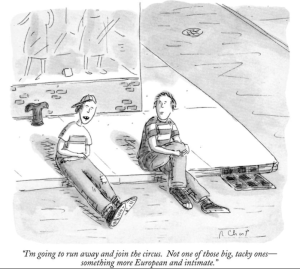 When I was little I always looked forward to the days where I could visit Teatro ZinZanni and watch my mom work. Teatro ZinZanni takes place in a 100-year-old Spiegeltent with a multi-course meal, and the circus happens all around you. My mom was the stage manager there and called the cues for the show every few nights. The show was pure magic. It didn’t matter what the show was, as it changed every few months, but the feeling was always the same. Watching the dimly lit circus tent come to life, being on the edge of your seat, being drawn into the bright lights and stunning figures, unaware of anything else in the world that might be happening around you. The acrobats would perform near and at your table. Leaping off the center lift in order to spin high above your head, before gently touching down and bringing you back to Earth, but still not quite. None of it ever felt real until it was over, and even then you still weren’t sure what you’d just seen. I would walk around in a daze for weeks afterward, never able to stop thinking about the show.

I was lucky enough to go visit Teatro Zinzanni again last month, to see the show Love, Chaos, and Dinner, through the current stage manager, Jordan Muller. I shadowed the backstage managers John and Liana, watched them work, and saw the planned chaos that happens backstage every night. Here’s a rundown of the hard work and mayhem that takes place backstage to bring the show to life every night. 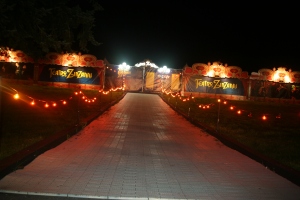 4:30 – The presets (getting props ready, checking lights, steaming costumes) are almost done. John’s presets last until almost the start of the show at 7, even though they can be finished in about an hour or two with no distractions. This is because John likes to draw them out so he can be around Jordan, the servers, and anyone else working on getting the show ready so that he’s there in case anything needs to be done or anything goes sideways.

5:15 – The server meeting. Along with the show, Teatro ZinZanni serves a four-course meal every night, so as well as performers and tech people, there are also servers and cooks. At the meeting, the servers gather on the floor in the lobby to hear about the details of that night. They sit like attentive grade schoolers waiting for their favorite teacher to come in; some are alert, others lounging and talking. The restaurant manager talks about new assignments. Because there are only two stagehands, the servers help with moving stuff like the crash mat, Chinese pole, and dessert slide. She also talks about new items on the menu, and tonight’s seating chart: no touch tables (tables that don’t want any of the performers to interact with them) and which tables are VIPs or friends of the cast.

One of the servers backstage

After that are more presets, and I watch Liana stack Zingo cards (like bingo, but better), and one of the servers shines silverware.

6:30 – Servers file out of the house (so the audience can come in) and high-five all the tech people. Jordan plays a game where he’ll try and leave the house right before the audience comes in, and sees how close he can cut it. After that, Jordan goes to the cast check-in in the green room trailer, and introduces me to the cast I don’t already know from previous shows. He puts the no-touch table number on the whiteboard, while one of the performers, Svetlana, a contortionist, stretches on the floor and everyone else gets ready.

We head back to the tech trailer where we hurry up and wait, for the next 20 minutes. We play mini-basketball above the doorway and discuss beaning people in the head as they walk in. We also discuss socks. When it gets closer to showtime, everyone changes into their blacks and puts their headset on before heading back to the tent. The headsets have 2 channels, one for Jordan’s cues, and the other an isolated channel just for John and Liana so it doesn’t interfere with the cue calling. I’m given my own headset as well. 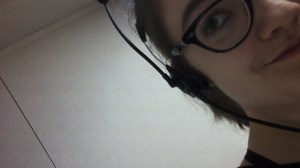 7:00 – The show starts. I watch the start with John, standing in one of the voms outside the producer’s bar (where two-three Teatro Zinzanni staff, cast, or tech guests can sit to watch the show without being at a table on the floor). There’s a small box outlined on the ground with tape that we stand in. It has been deemed small enough to not be in the way of the performers rushing through. However, after standing there for the first bit of the show, I might disagree.

I follow John around for the first third of the show and then switch over to following Liana during soup service (one of two breaks in the show to serve food to the guests). I watch John set up for a magic trick involving a wine glass that floats through the air, and talk to Svetlana about circus school and the classes I’m taking.

I go to the green room during main animation, the second food break, where I talk to Rachel (one half of the trapeze duo Duo Madrona) and Elena (who does contortion and lyra), who are stretching on the ground. We mainly talk about the weather, but we also talk about our families and schools. Many of the performers have children and manage to integrate it into their circus life. For example, two of the performers have young children who are frequently backstage with them during the show. On some nights there are as many as six kids backstage. Svetlana and her partner (Voronin, an illusionist, also in the show) have older two children, one of whom performs in the show alongside his father now that he’s a teenager.

The green room on the right, with one of the entrances to the tent on the left

I come back to the tent just in time to watch John and Liana set the 24’ long Chinese pole, an activity that requires four servers, Jordan, both backstage managers, a performer, and a hydraulic winch to raise into position. It takes about one minute to put up and about 30 seconds to take down, in full view of the audience. After that, I hang out backstage and talk to the performers. The most exciting moment by far is when John and Liana are setting for the train’s arrival. They take 2-D wooden train cars stashed all around the outer ring of the tent backstage, piece them together, and line them up on the outside wall (filled with smoke), before rushing them into the darkened tent. Assisted by 6-7 servers, it races around the outer ring of the tent, blowing smoke and whistling, before exiting again. It is very important in this instance to hide in the corner so as to not get your toes run over.

After that comes dessert service, also known as Chaos, in which 287 desserts are served in 3 minutes, while the show continues on at a frantic pace. It is here where the performers fly on the winch, do back handsprings off the table, and sprint through the tent. While this is all happening, dessert is also being served via the dessert slide. This is a contraption that pedals like a bike to race the desserts on plates up a conveyor belt, and down a slide with a jump at the end, so the servers and performers can catch them and put them on tables. It is also here that Eleanor the bright pink sparkly baby elephant is wheeled through, wearing a tutu and with the show’s diva perched on her back.

Eleanor waiting backstage for her turn.

At the end of the show, everyone lines up to watch the bows, the crew is thanked, and the audience heads home for the night. Everyone returns to their trailers to get changed, cleaned up, and put everything away, and then returns back to the tent for the crew meal. After the show, the kitchen makes one more meal so the cast and crew can eat together as a circus family before heading home.

The tent after the show, with the tables and chairs up for the night

The circus is spectacular, inside and out. To someone who never sees the chaos backstage, it all seems impossibly magical. However, after watching the show from backstage, it’s even more so. I spent a lot of my time figuring out where people were going to be rushing next in order to fling myself out of their way, and I spent a great amount of time smooshing myself in the corner. But to me, that’s just part of the fantastical beauty and mystery that makes circus so exciting.

One of the backstage voms organized for the night

If you want to see more of what it’s like at ZinZanni, backstage or in the audience, check out these videos:

*All photos in this article were taken by and remain the property of Jordan.