A few weeks ago, I was able to go see the then-touring production of Cirque Du Soleil’s Kurios. It was my fifth Cirque show and one that I had heard absolutely raving reviews about from all of my friends, so my expectations were set high.
It was immediately apparent to me that it would not be difficult for Kurios to meet and exceed these expectations. I was captivated from the moment I took my seat and watched a clown gag play out in the row in front of me involving three performers handing a fleece sleeping cap, a pillow, and a mobile to an audience member and instructing him to take a nap on his girlfriend’s shoulder.
The show opened with a cradle act, which was masterfully choreographed to the music and had a clear, engaging storyline. As an aerialist, I loved this act because it was one of the most technically perfect performances I’ve ever seen. The flyer’s form was simply impeccable and each skill, from the basic to the ridiculously advanced and complicated, was executed flawlessly.

Some other acts that stood out were the hand balancing and rola bola acts. The hand balancing act, led by acrobat Andrii Bondarenko, was as technically impressive as cradle — Andrii did not wobble once, even in a one arm handstand thirty feet above the stage on a stack of chairs without a safety line — but (without giving anything away) the act also had a clever and entertaining ending that, in typical Cirque fashion, pushed conceptual and physical boundaries with its creativity and ability to surprise an audience who are convinced they know what’s coming.
The rola bola act, in short, was the most nail-bitingly terrifying act I’ve ever watched in any theatrical production. I was on the literal edge of my seat the entire act. With the combination of the level of difficulty of the tricks performed and the exceptional, suspenseful presentation of them by the lead artist in the act, I truly could not believe what I was seeing. Even several weeks removed from seeing the show, I still cannot comprehend how it is possible to balance on five rola bola tubes thirty feet above the stage.
My favorite part by far, though, was the Acronet routine that opened the second act. Essentially an extra bouncy flying trapeze net, Acronet seemed, to put it plainly, like a trampoline artist’s dream come true. The artists, wearing brightly colored fish outfits with fins framing their faces, helped bounce each other up all the way to the cupola of the tent, doing some of the most complicated tricks I’ve ever seen. The act was fast-paced and high-energy, the perfect second act opener.
Overall, Kurios was by far the best Cirque show I’ve seen so far — thanks in part to the creativity, artistry, and amazing skill of the performers in their acts but also to the beautiful bright costumes, diverse and engaging but not overpowering music, and the seamless choreography of group numbers and especially of the transitions between acts (the juggler and yoyo man were phenomenal!). Kurios was, to put it plainly, as close to perfect as you can get in absolutely every aspect. 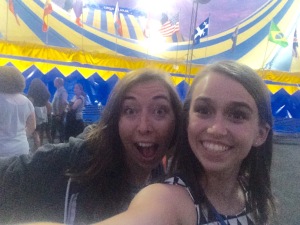