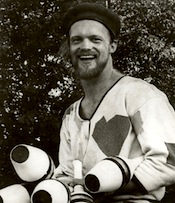 Over sixty years ago, Hovey Burgess, then 17, found himself running away with a circus.

Having recently turned 75 years-old, Burgess has travelled with dozens of circuses including Circus Flora, Circo Dell´arte, coached students from around the world at the Ringling Brothers and Barnum and Baily Clown College, and – the most prevalent of his accomplishments – integrated circus arts into the Tisch School Of the Arts´ master acting program. Burgess teaches circus as a means to create well-rounded actors and actresses with high versatility that makes them easy to hire. Hovey began studying circus at age 17, when he joined a small travelling show as a juggler and unicyclist, his most high-level skill being bounce juggling seven balls. As a non-juggler, I cannot even imagine attempting the skills Burgess has mastered. Soon thereafter, Hovey was bitten by the circus bug. No longer satisfied living a life working in an office like so many others, Hovey decided to share his talent with the world (including those attending Tisch´s master acting program). His class has been a required part of the curriculum since 1966 and has been spreading circus culture around New York City since then. 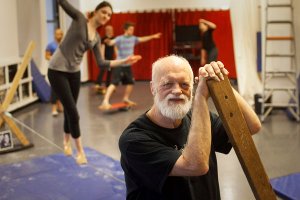 Before very recently, I had never heard of anyone by the name of Hovey Burgess. After learning who he is and all he has done for the circus community, I feel really isolated having not known this. Hovey truly is a circus legend who has set the bar for many jugglers after him, as well as made circus more well known and inspired countless students. He does a lot of work with Bindlestiff Family Cirkus and recently they hosted his 75th birthday bash. I´ve seen Bindlestiff perform on many occasions as well as performed with their cavalcade of youth, and I cannot believe it has taken me this long to be exposed to Burgess´ master accomplishments.

As the future of circus, I feel we (aspiring youth artists) have a certain obligation to not only be innovative and focus on moving forward with new apparatuses and styles of performance, but also an obligation to understand how circus has gained popularity and reached where it is today. Even though the history of circus isn’t as ¨artsy¨ as the newer, contemporary circuses, it all started somewhere.  Circus history is really really cool once you delve into it, and I feel like anyone who is an aspiring circus artist should know all the big names in the business. So, here you go, another piece to the puzzle of circus past; Hovey Burgess.